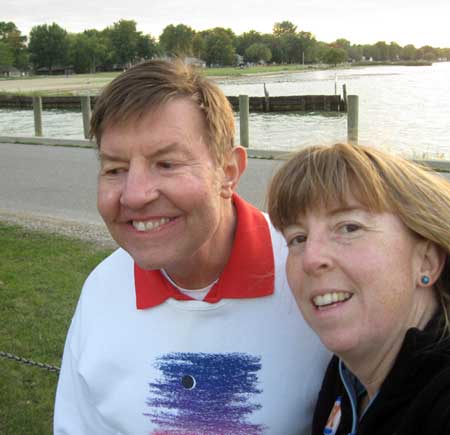 Our first evening in Canada

Once upon a time, there were two children, a brother and a sister, who lived together in a big house. They swam in the backyard pool, watched “The Waltons” and “All in the Family,” and played games like “Sorry” and “Uno.”

The girl was small, and the boy was big. For as long as she could remember, he was over six feet tall, a gentle giant.

He’s still a big kid, and he’s here with me. I’m talking about my special brother, Hank, who is traveling with me for a week. He’s now 59-going-on-10.

Sometimes, I think I must be crazy to do this. It’s like taking Forrest Gump on the cross-country trip from Rain Man. I am on call 24/7, making sure that his needs are taken care of. I want his vacation to be perfect, but I’m finding that’s at the expense of my own wishes.

For months, I looked forward to Hank’s reaction to Canada, because he’d never been to a foreign country overnight. I wondered how he would handle my impetuous way of traveling without making plans, going where the wind takes me. I wanted to give him the chance to make decisions, but how would I handle his choices?

Meanwhile, he was savoring the anticipation of the trip. Every time I talked to him on the phone, he brought it up. Where would we go? What would he pack? The day before we left, he said, “The closer it gets, the exciteder I get!”

I started him out with two choices: An eastward loop to Canada and Niagara Falls (which he’d never seen); or a drive straight north to Canada, and then south and west to Indiana to see our two aging aunts. He chose the aunts,  “Because I don’t know whether I’ll get to see them again.” Niagara Falls can wait “until the next time.” He’s already excited about “the next time.”

I realized this trip was going to be challenging when I got lost just leaving his house. The worst kind of passenger is one who can’t help you navigate but who goes “uh-oh” every time you make a u-turn. We’d only been on the road five minutes when he was going “uh-oh” and I was searching my vocabulary for words like “sheesh” and “dang,” instead of my usual choices.

He can’t fault me for my lack of direction. I suggested one morning that he go to the motel lobby for coffee. He went about 10 feet to the left. Then he came back and said, “Which way is it again?” The next time I made a u-turn, he laughed and said, “That’s OK. I get lost trying to get a cup of coffee.”

At some point, I realized that the subtleties I relish while traveling would be lost on my companion.

My first inkling was his exclamation on I-75 — in order to make the most of Hank’s vacation, I was driving on interstates instead of my favorite 2-lane roads. “Look at that!” he exclaimed. “A Wal-Mart truck!” Waving his hand at the semi I was passing, he said, proudly, “I know a Wal-Mart truck. I know a Fed Ex truck. And I know a Kroger truck.”

He may not be subtle. But he’s doing the same thing I do while traveling: Looking for similarities and differences from his own home and routine. We’re always searching for patterns.

“I’ve never seen a beach in Canada before!” he said, when we walk over the sand dunes to Lake Huron. He was comparing it to the beaches he knows in Florida. “Wait ’til I tell Joy I saw a green golf cart!” he said. Joy is the one person he knows who owns a golf cart.

He started tracking our motel room numbers. The first night, we had room 5. The second night, we had room 105. On our third night, the streak was broken with 119. So on the fourth night, as we went into the lobby, he said, “I wonder what our room number will be tonight — 5, 105 — that was so funny! Maybe we’ll get 119!” 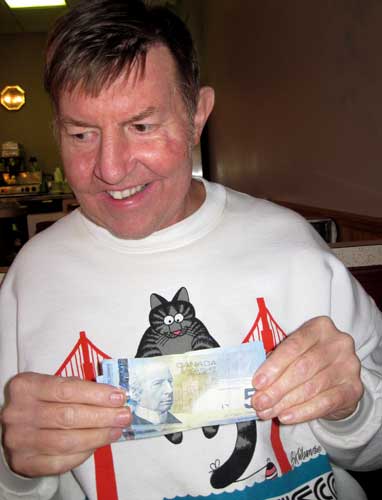 Hank shows off some Canadian bills

When we bought our first meal in Canada and broke a $20, I asked him to carry the Canadian money. I handed him the change, which included several loonies and a toonie. “Where are the ones?” he asked. I pointed to the loonie. “That’s it; they don’t have dollar bills.” “That’s weird,” he said, frowning.

I asked what his favorite thing was about Canada. “When I couldn’t get the car door open!” We’d gone to the marina in Grand Bend, but there was a storm, and the wind was blowing over 60 kph. Hank tried to get out, but he couldn’t fight his car door open against the wind. So he handed his camera to me, and I took it out to the beach for pictures. Meanwhile, as the wind buffeted the tiny Tracker, he sat inside the car, warm and toasty. 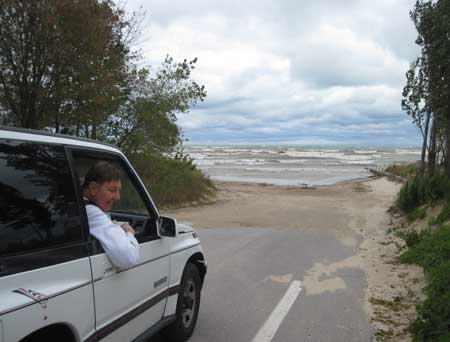 Watching the storm from the car

Finally, after three days in Canada, we drove back across the soaring bridge at Sarnia to Michigan. That’s when I discovered that border crossings are amazingly easy with Hank in the car. He’s so genuine, he makes the Homeland Security guys laugh out loud.

“What did you buy in Canada?” the uniformed man asked, holding our passports and peering in the driver’s window. From the passenger’s seat, Hank said, “I bought a t-shirt!” I laughed out loud and admitted that we’d also bought 10 bags of potato chips. I thought that would surely cause suspicion and a car search. But no, the man laughed. “Any alcohol or tobacco?” he asked. I chuckled at that, too. Traveling with Hank, there’s no need for alcohol or tobacco. He’s always happy.

Then we were back in Michigan, and Hank turned to me and said, “Well, I had two nights in Canada. I guess I’ve seen all that’s different about Canada.”

I can’t wait to hear his comments on Michigan and Indiana. 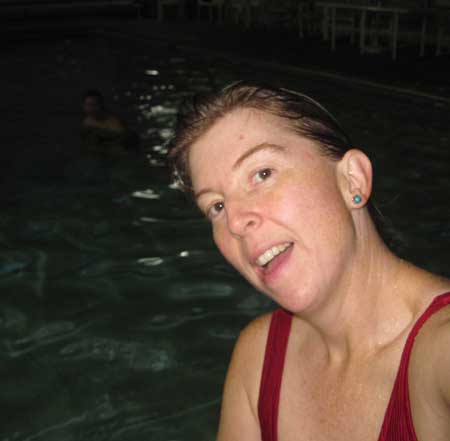 Meps and Hank in the indoor pool 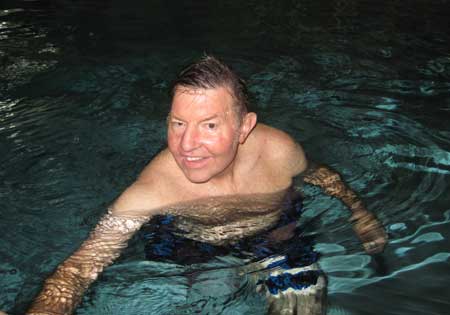 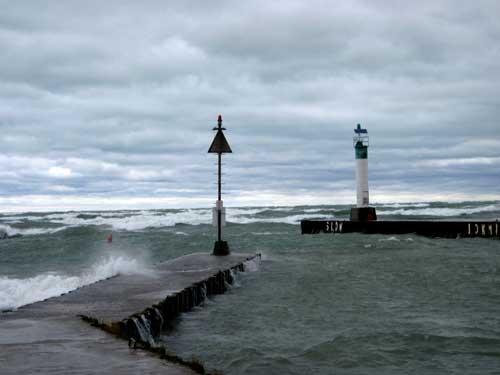 The big storm at Grand Bend 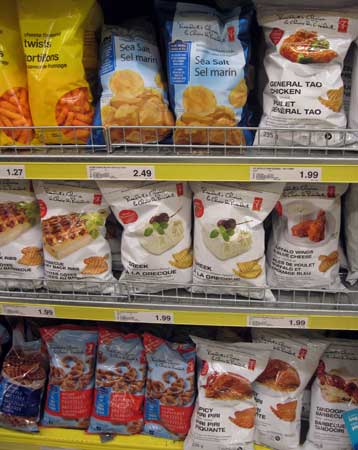 We really did buy 10 bags of these!

7 thoughts on “Canada is like a box of chocolates”