About three weeks ago, my Dad told us to look for the Shpongle CD he had ordered as an anniversary gift. Oh boy! A present!

A day later, my brother called to tell me he was sending a card with some photos. He’d used up a disposable camera I’d gotten him, and now he was sending me some of the prints. Oh boy! Pictures!

I waited about four days, and then I started going into the office. Every day, I’d stick my head in an ask, “Any mail for us?” “No, not today.” After about ten days of this, I was a little embarrassed to ask. And I was starting to worry. What if both items were delivered on the same day, and the mail got stolen out of the box? It’s not a very secure mailbox.

Finally, I got a sheepish email from my Dad. He’d accidentally put his own address as the ship-to address. Just as I was writing him back, teasing him about his “senior moment,” my phone rang.

It was my brother, also sheepish. “You don’t have to look for that card any more,” he said. He’d put insufficient postage on it, so it got returned.

I sat back, laughing. Here I was, all excited about getting a couple of goodies in the mail, but they were just a tease — both senders had sent them to themselves!

On Friday, I had another “Oh boy! A care package” realization. I poked my head in the office. “I’m expecting another box…” I said. “Oh, sure, they probably sent it back to themselves,” Anique teased me. “No, really, it’s…” I broke off. I was afraid that if I told her what I was expecting, I might never see it.

Finally, I sort of mumbled, “It’s a box of homemade wine.” I didn’t tell her that it’s excellent pear, grape, and cherry wine from Yelm, Washington. But Anique’s reaction was completely unexpected. “You like homemade wine? Really? I have a jar of it in my car!” I looked at her askance, wondering why she would have a jar of wine in her car in the parking lot at work. I guess if she breaks down, like we did in Iowa, she could give it to her Good Samaritan instead of an inflatable space alien.

As it turns out, Anique and her boyfriend have a pear tree, so they made a batch of pear wine. They couldn’t even use all the pears, and they still ended up with a lot — a whole lot — of wine. 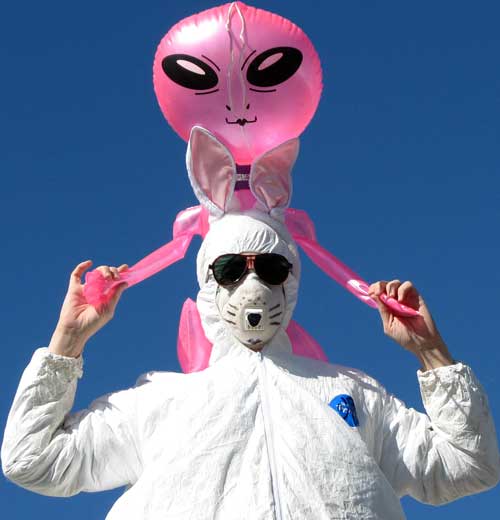 Since it was Halloween, I went back to the boat and put on my costume — a big boatyard bunny, complete with Tyvek “bunny” suit and dust mask decorated with a Sharpie marker. The ears were real, though. I hopped across the yard, surprising a lot of serious, hard-working folks and making them laugh despite themselves. Nobody in the yard had any candy for me, so I played Easter bunny and gave candy away instead.

But when I got to the office, I got lucky. I held out my bag and said, “Trick or Treat!” Anique had fetched that promised jar of wine, which sure beats candy corn and little packages of Lifesavers.

I’m still waiting for my “Oh boy!” care packages — Dad’s Shpongle CD, and Hank’s card with the photos, and Tom’s excellent Washington wine. But the consolation prize, sweet North Carolina pear wine in a quart mason jar, was fabulous, and that makes the wait worthwhile.