Well, that last piece of mine was a total flop. Across the internet, I could hear my readers rolling their eyes. They wanted a lively Burning Man report with crazy costumes, naked people, and dancing boys. Instead, I got all serious.Sorry ’bout that.

I will now proceed to Day Two, when the sun came out with all the crazy costumes, naked people, and dancing boys.

The dancing boys were on top of a large Penske rental truck parked across from the Squid Wagon. One of them wore only a pair of fur hot pants with a long, furry tail. He was my favorite, and I worried that he might trip over his tail and fall off the truck.

The sun was bearing down on us, so we set to work on our flaccid shade structure. First, we unloaded the roof of the van — two bicycles, a room-sized piece of Berber carpet, and one disassembled porta-potty.

That porta-potty was the reason we were camping with the Lamplighters.

Sometime in July, our cell phone rang in the Morehead City Salvation Army, where we were shopping (unsuccessfully; it’s a boring thrift store) for costumes. A Burner named Cosmo had seen my number posted on a Burning Man ride board. He wanted to know if I’d be interested in carrying a large parcel in our van, in exchange for some gas money. “It’s a shower for the Lamplighters,” he told me.

Cosmo asked me “Where are you camping?” I admitted that we hadn’t figured that out yet. “You should camp with Lamplighters,” he said. “It’s a fantastic group of people — they’re just like family to me. Sometimes, I don’t even leave the camp the whole time.”

Barry thought joining the Lamplighters sounded like a great idea, a completely different experience from last year. Instead of a small group of Seattlites near the outer edge of the city, we’d be with a large international group right in the center of the city, with a communal kitchen and lounge. But was this fellow Cosmo some kind of nut? How could he go to Burning Man without leaving his camp?

We never actually met the man before we set out on our cross-country journey. We made the arrangements by phone, and one weekend, he dropped off a large, lumpy pile of plastic parts at my brother’s house in Durham. A few days later, we stopped through, strapped it to the top of the van, and carried it across the USA to Cosmo and the Lamplighters.

Our camping spot, assigned to us by a fellow called Snotto, was on an alley that ran through the camp. To one side were a forest of tents and the elaborate Lamplighter kitchen. On the other side were the dancing boys and the Lamplighter bar and lounge. Behind us were Cosmo’s Ryder truck and a large cardboard box that we assumed was for storage. And in front, about 20 feet away, was a small row of porta-potties.

As soon as we emerged from the van, it was apparent that our campsite wasn’t on a high-traffic pedestrian walkway — it WAS the high-traffic walkway. The problem was, we needed our shade structure to keep the interior of the van from turning into an oven, and there was no way to reef the sail.

As we set up the giant canopy, I fretted about all those strangers walking through “our” space. Could we hang sheets or set up chairs to keep them from walking under our shade structure, or across our carpet?

Around then, a woman walked by on her way to the porta-potties. She was wearing a beautifully colorful costume, and I complimented her on it. A fellow passed on his way to the kitchen, wearing a 70’s-patterned muumuu, and we got into a conversation about how he found it on the internet. Then a neighbor came from another direction. He wasn’t sure which way to go — there didn’t seem to be a route for him that didn’t go through our space.

“Please, feel free to come through this way — you’re not bothering us at all,” I said. “We can’t figure out any way to make this shade structure smaller, so just come on through and enjoy it.”

That was how we met one of the most interesting Lamplighters, No Account, known around camp as Noah. The lady in the beautiful costume was Day-Zee. The dancing boy was Christopher, but I never learned the name of the man with the amazing muumuu.

I started to relax. What if we didn’t “claim” the space, but actually welcomed people walking through? What would happen?

What happened was that we met dozens and dozens of fun people on their way to the kitchen, the bar, or the bathroom. We were inescapable — since we attached part of the shade structure to our neighbor Mike’s RV, even people who didn’t stop to say hello had to pass under our guy rope, decorated with the same colorful yacht pennants used at our wedding in 1991.

Once the structure was up, we turned our attention to our costumes, packed in three large plastic totes. Mike unloaded his bicycle, grabbed his camera, and set off to see the art.

About 45 minutes later, when Mike returned, we were still there, digging through the costume boxes. He was puzzled. “Haven’t you left yet?” he asked. 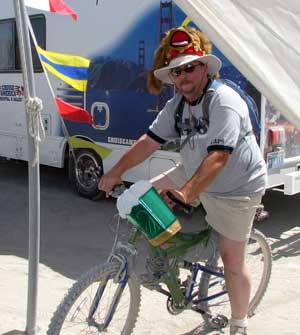 What had happened was this: As we sorted through the costumes, people came walking through our camp. We said hello and got into conversations with them. So the 45 minutes included about 5 minutes of costume-sorting and 40 minutes of making new friends.

We’d been admiring Swagmeister’s tatoos, teasing Boxes With Bears about his upcoming wedding, and gossiping with Sean about the dancing boys across the way. Then Leanne and Jeremy came by, and we introduced them to Mike. But he had more to see, so he went off again.

When he returned, we were still there. “Haven’t you guys left yet?” he asked, incredulous. “We’re almost ready!” we said. Barry was just tying the turtle sarong that went with his mind-blowing bowling shirt. I had zipped up my pink knee-high boots and was tying on the pink-and-green hat.

“Have you met Mr. Mister?” we asked. “He’s the guy camping in those cardboard boxes over there.”

This particular hour had been spent visiting with Mr. Mister, who gave me a tour of his home. He’d used aircraft part boxes to construct a shelter that was neatly organized and nearly dustproof. In previous years, he’d learned to make it fairly tall, because people didn’t realize it was a house. He’d once been in bed when an amorous couple sat on top of him and started making out.

With all the visitors, it took us forever to blow up the four inflatable space aliens, A. Leeanne, Ros Well, Lou Wheeze, and Gert Rude, and put on their jeweled neck collars so their heads wouldn’t droop. Then I strapped them onto my bike and assembled their spacecraft. Barry put together his flying apparition and hung it from his bike.

Finally, late in the afternoon, we took off. To Mike, it must have seemed that we dawdled around camp all day. But we’d actually gotten a lot done, from engineering an unusual and sturdy shade structure to assembling ourselves and our bicycles as art. For we were not just there to see Burning Man, we were there to be seen by Burning Man. 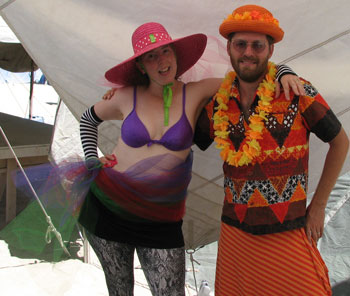 1 thought on “At a crossroads”