The weather’s been so beautiful in Vero Beach this week, Barry and I have just been riding, riding, riding our bicycles. With the exception of two 65-foot-tall bridges that span the Indian River, there are no hills. It’s all flat. Whee!

This morning, for the first time, Barry and I pedaled in separate directions. Barry went to a meditation group in town, and I headed for the farmers’ market on the beach. I filled my backpack with peppers and cucumbers and strawberries and brussels sprouts and giant crunchy red radishes. I sampled grapefruits and tangerine juice (yum) and carrot juice (not-so-yum).

Then I walked over to the beach and dipped my toes in the ocean. Life is sweet.

I was pedaling back to the marina, a few blocks later, when a big bus in a bank parking lot caught my eye: The Bloodmobile.

You may recall that earlier this week, on Valentine’s Day, we commemorated our friend Becky’s birthday by hugging people. One of the other things people did in her memory was to give blood, including people in the US, Australia, and New Zealand.

Barry last gave blood about 20 years ago, and got a huge painful purple bruise all over his arm. That scared me so much, I never tried it.

Seeing that big bus, I thought of the folks who gave blood in Becky’s memory this week. Some of them were first-time donors. I’ve given my share of blood at the doctor’s office for tests. Surely donating couldn’t be much harder than that?

I rode back to the marina to meet Barry. “There’s something I’d like to do after lunch, and I’d love it if you’d do it with me,” I said. When I told him I wanted to donate blood, he was a little surprised. “You know what happened the last time I gave blood, right?” he asked. Nonetheless, he was willing to try it again.

We ate some lunch — they recommended that we eat a meal first — and then biked back to the big bus. On board, we each filled out a health questionnaire and had temperature, blood pressure, and heart rate measured, along with the iron level in our blood. We passed all those tests, so we were ready to donate.

The bus had four couches, and Barry took one on the right (so his left arm was accessible) and I took one on the left. I’m sure there’s a carefully established protocol for taking the blood out, but I’m a little squeamish, so I didn’t watch very closely. Besides, we were busy chatting with the three employees on the bus, two technicians and one woman who served as a sort of usher-organizer-cheerleader. She was the one who gathered up a whole pile of t-shirts, calendars, coupons, magnets, and pens, and gave them to us for donating.

It didn’t seem like very many minutes before there was a very loud “BEEP!” and Barry was done. I was done about two minutes later. It was easy.

Afterwards, I mentioned that we were donating in memory of Becky, and I hugged my technician. We’d been warned about adverse effects, including the infamous bruising, lightheadedness, and nausea, but as we got onto our bikes with our now-stuffed backpack of goodies, I felt physically fine.

Mentally, though, I was feeling better than fine. I felt super! Magnanimous, healthy, and proud. Glad to do something to help the world in Becky’s memory. Over and over, this lesson, the one about generosity, comes home to me: I gave up a little blood, but I got back way more than I gave. 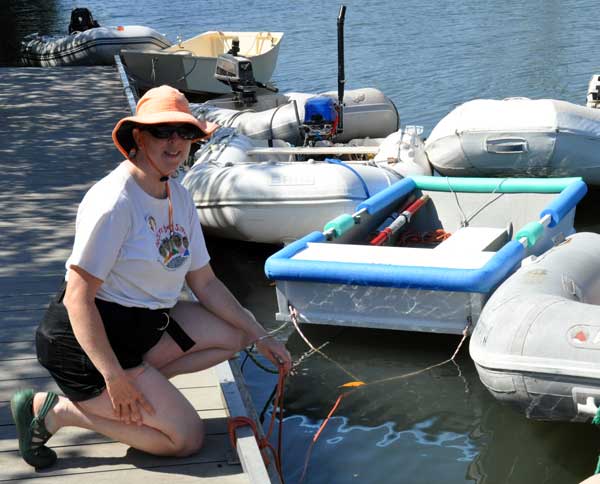 Everything we do ashore starts with a row in the dinghy. Here's Meps, wearing a Becky's Hugs button, tying the dinghy painter. 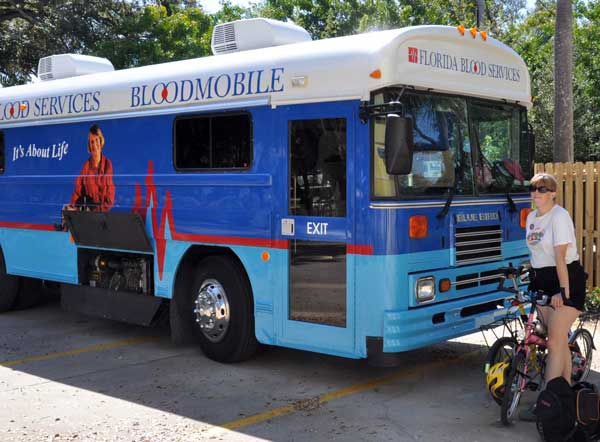 After the rowing comes the bicycling. Here's Meps and the Bike Fridays in front of the Bloodmobile. 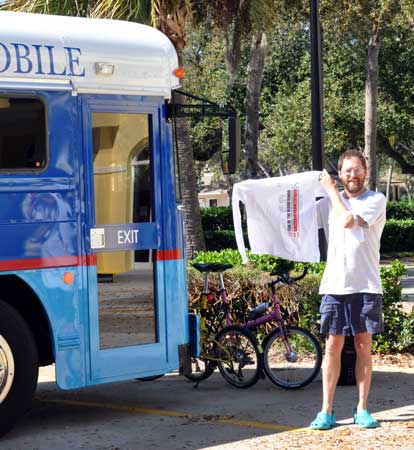 Afterwards, Barry shows off his new t-shirt, which says "2011, the year of the blood donor."

4 thoughts on “An easy gift”