“I promise, it will be worth it,” said my friend, Sparkle. I had to trust her, but waking up at 4:30 am was a severe test of our friendship.

The beeping alarm didn’t phase Barry, who rolled over and stuck his head under the pillow. I got up in the dark, drank a sleepy cup of coffee — Sparkle had gotten up at 4:00 am to make it — and carried one to Barry in bed as a bribe. We’d loaded the van the night before, so now all we had to do was rouse two pairs of sleeping kids to go with us.

One pair was Sparkle’s youngsters, who’d been through this drill several times before. They climbed into Mom’s car and went back to sleep, knowing that what was in store was worth it. 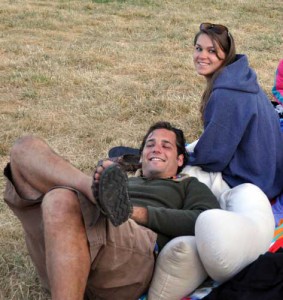 Nick and Anneliese, waiting for the balloons

The other pair was our traveling companions, Anneliese and Nick, who in their early 20’s are too old to be proper kids but are still young enough to be used to people calling them “kids.”

We parked the van while it was still dark and started walking towards the park. Suddenly, I saw the first one ahead, an enormous colored lightbulb against the indigo sky. It was a full-sized hot air balloon that appeared in the night sky for a few seconds, and then, suddenly, the lights went out.

“Did you see that?” I asked, excitedly.
“See what?” one of my sleepy companions replied.

Just then, it happened again. A balloon started glowing and rising in the sky. Then a second one. The first one went out and a third lit up for a while.

Barry guessed that they were using their burners to light the balloons from the inside. Each time they did this, the balloons would rise in the sky, and when they turned the burners off, they would sink for a little while. Then they’d light up again, but now they were in a slightly different place.

Hot air balloons in the Reno night sky are completely magical. Sparkle was right. It was worth getting up for this.

But there was more to come. When we arrived in the park, there were people everywhere, and vendors selling t-shirts and donuts and pizza. Loudspeakers blared with music and announcements. There were long lines for the port-a-potties. I had never seen so many humans gathered in one place at 5 o’clock on a Saturday morning. 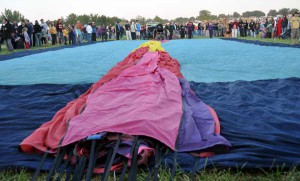 What we’d just seen was the Dawn Patrol, a small number of hot air balloons that are qualified to fly in the dark. Now Sparkle led us onto a vast field, where we spread our blankets among the crowd, next to a truck marked “balloon chase vehicle.” It was like setting up for Fourth of July fireworks or a picnic on the beach. I wasn’t sure which way to face to watch the action.

But when the Mass Ascension Launch occurred, it didn’t matter which way I was facing. What I hadn’t realized was that the balloons were right here among us. They were just flat, and they were everywhere! Some of the picnic blankets were spectators, but a lot of them belonged to balloon crews who were just waiting for the sun to come up.

There was a gentle pastel-colored dawn, pinks and blues and yellows reminiscent of a baby blanket. The day was clear and free of clouds as the crews fired up their noisy fans and propane burners. Soon, all around us, balloons started growing organically out of the field like huge multi-colored pumpkins. 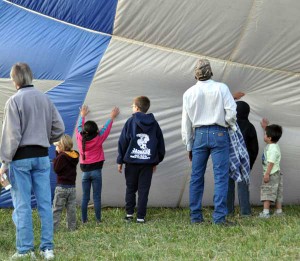 The kids watch a balloon being inflated

Mouths agape, we tiny humans started walking among the colorful giants before they took off. It was thrilling being in the middle of almost a hundred hot air balloons; the photos do not do it justice.

The balloons didn’t all rise at once. They filled at different rates, and when they were ready, they bucked like horses. Their pilots and passengers climbed into the wicker baskets, and then they were quickly cast off.

One by one, they drifted up into the sky, until the air above us was full of them, silhouetted against the blue. They had left the world of earth and created a new world in the sky. Then the air currents separated them and carried them slowly away, and they drifted over the horizon. 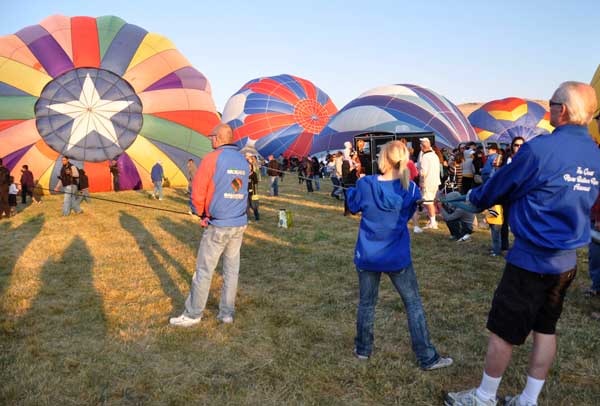 Keeping the balloons on the earth 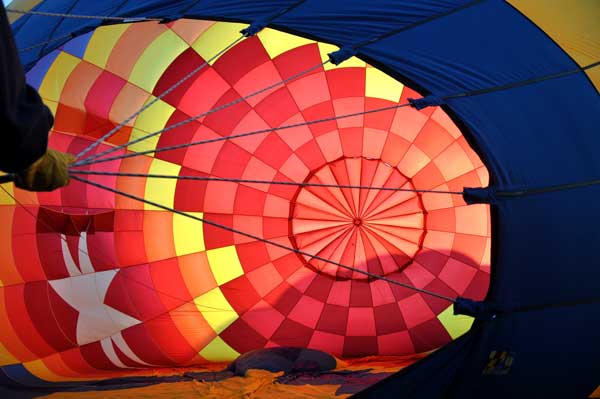 Looking inside a balloon on the ground 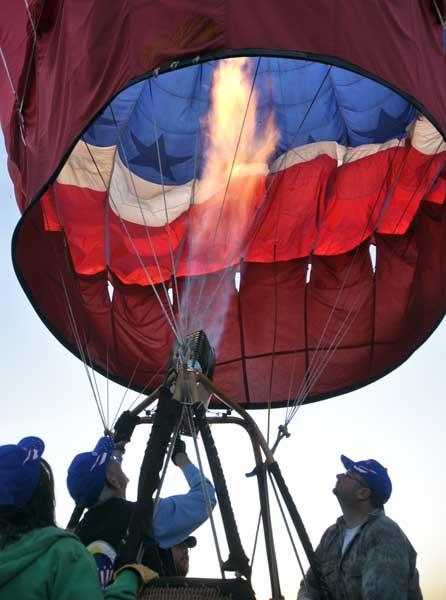 Heating the air inside the balloon 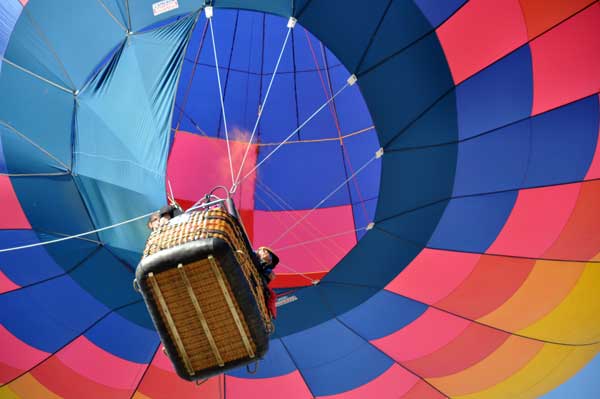 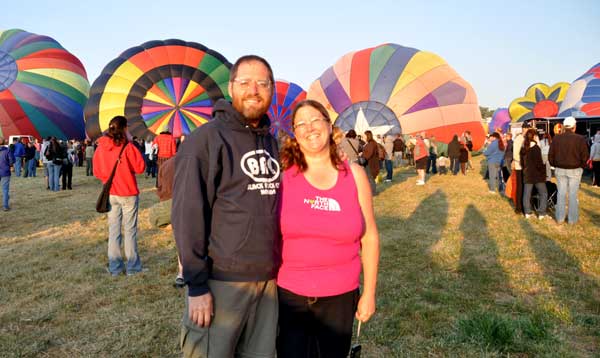 The field of balloons 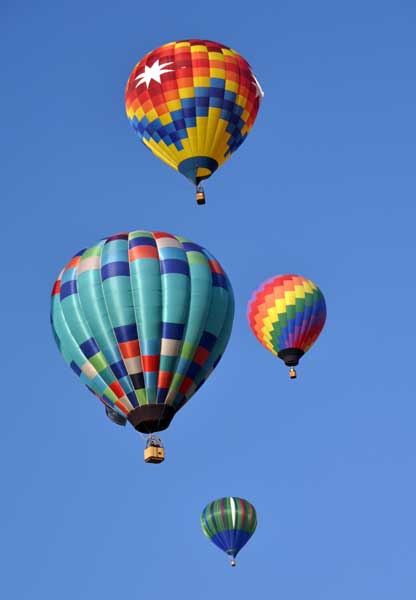 Balloons in the air 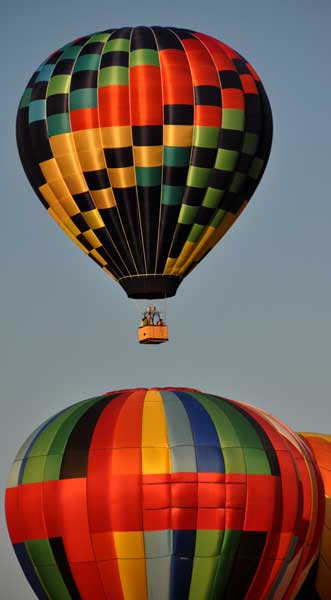 The colors were marvelous 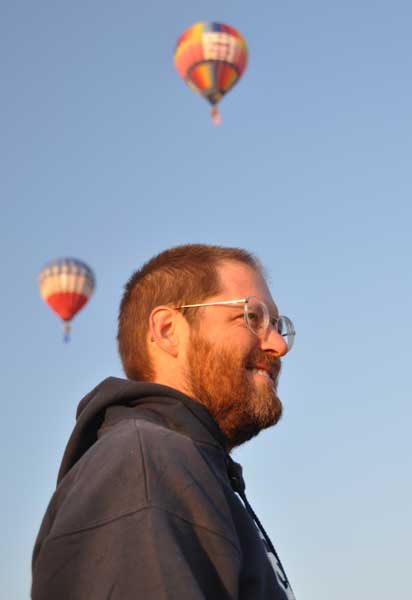 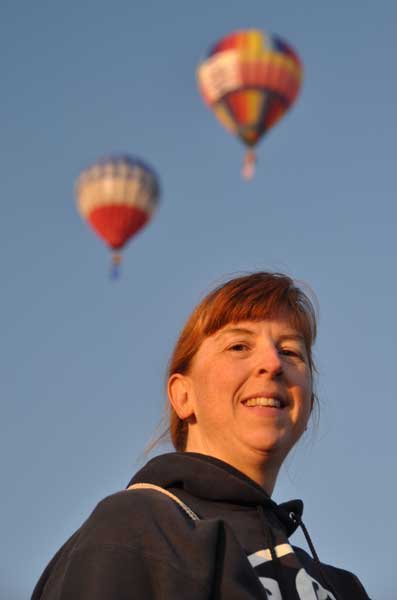 3 thoughts on “An air of wonder”