As froggies go, he wasn’t very big. He was about an inch long, smaller than all but the tiniest plastic ones in the toy store.

He wasn’t plastic, though. He was real.

The day we picked up my brother’s car was a tough one for me. The car was the largest thing Stevie had owned, and although my job was to eventually sell it for his estate, I was emotionally attached to it. Standing beside the plain-vanilla Camry with the keys in my hand, I got a little teary-eyed.

That’s when the the little green guy appeared. He crawled out from behind the passenger-side mirror and looked at me with big round eyes. Did he know he was an omen, or did he think he was just a frog? Was he really a Froggie?

When he passed away, Stevie’s living room walls were decorated with paintings of beaches and lighthouses, and in the center hung his doctorate, double-matted, in a heavy gold frame. In the place of honor, right below the doctorate: His froggie collection. That’s right, froggies. I never once heard him use the word “frog.” 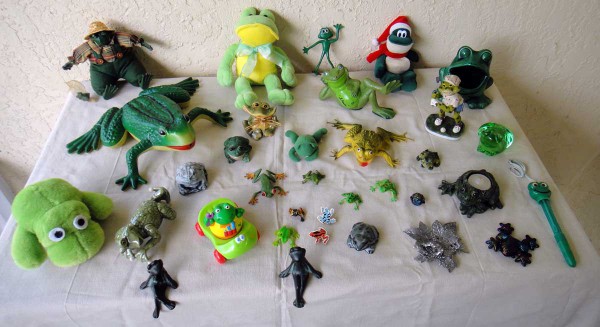 Stevie had stuffed froggies, glass froggies, ceramic froggies, metal froggies, and plastic froggies. Some were elegant, some were goofy. One of them used to make croaking sounds, although I accidentally destroyed that capability when I ran it through the washing machine.

The first one came from a coworker, 15 years ago. He had such fun with it, calling it “Froggie,” and making up stories about it, that others began giving him froggies as well. A friend of his mentioned a “Froggy Battle,” which sounded epic. Dad sent froggies for birthdays and Christmas, and I gave him Seattle-themed froggies. Stevie never bought a single one for himself.

He referred to them by silly names: Santa Froggie, Big-Mouth Froggie, Squeaky Froggie.

Stevie was very protective of his froggies. When I sent him a stuffed gorilla named Curious George, he wrote back, “Did I tell you that curious george can stay but that the Froggys and their extended family have eminent domain!”

Stevie was in rare form with his thoughts about a February event called GroundFrog Day, in which a bullfrog by the name of Snohomish Slew offers his weather “frognostication.” He wrote:

“Snohomish Slew and I could become very good friends although as long as Mr & Mrs Froggie are around they cannot be replaced by an upstart tadpole from who knows where who can barely speak froglatin and does not see his shadow cus he probably don’t have one!! Plus he makes BAD predictions and as anyone knows…when you’re frozen like he was you are usually braindead upon arrival!! I guess I’m kinda hard on Slew this morning but ya gotta be kind of jealous towards someone who gets to live in a place called Flower World!”

At Stevie’s memorial, we displayed all the froggies, and afterwards, family and friends could choose one to keep as a memento. I ended up with more than my share of Froggies — Bendy Froggie, Spitting Froggie, Playskool Froggie, Sparkly Froggie, and a bunch of tiny plastic ones.

With Stevie on my heart, you can imagine what I thought when that live little frog climbed out from behind the car mirror, looked at me, and climbed back into his hiding place again.

I am sure that there are people who find frogs on their cars all the time. I am not one of them. Until that day, when I picked up Steve’s car, I had never in my life seen a frog on a car. So I had a name for this little guy: Omen Froggie. 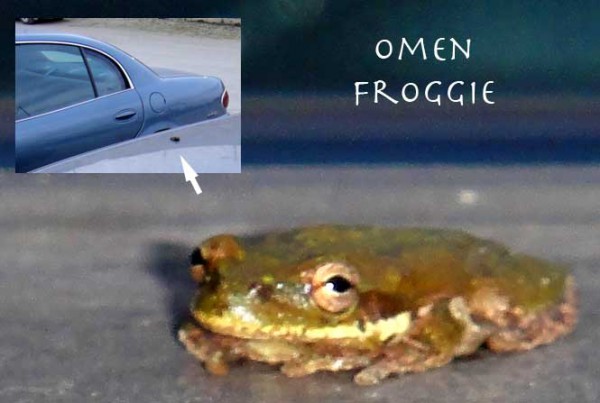 Omen Froggie was tucked safely behind the mirror when we drove the car to town for dinner. There was no sign of him when we came out of No-Name Pizza. Was he still in the mirror? Was he chowing down on pizza scraps? Was he hopping around Beaufort?

It was on the way home that he reappeared. At 55 mph, he decided to make his move. “Look! Froggie!” said Barry, who was in the passenger seat. Our little friend had crawled out from behind the mirror and was now clinging to the passenger window. With his tree-frog toes spread wide and his skin blowing in the wind, Froggie was enjoying a perilous — surely terrifying — joyride. “Hang on, Froggie, hang on!” I cried. I was a very distracted driver, paying more attention to the tiny passenger on the outside of the window than to the other vehicles on the road.

I didn’t want Omen Froggie to go flying off along the road and get killed. He was a Very Important Froggie, and I needed to return him to the boatyard, where he had come from.

Or had he come from the boatyard? Perhaps he had come from another dimension! Maybe he just popped into this universe to let me know Stevie was keeping an eye on his car. And me.

Omen Froggie did not fall off the car. He made it safely back to the parking space where we’d found him. I took a picture of him sitting, serene, on the roof of the car. And after that, I never saw Omen Froggie again. 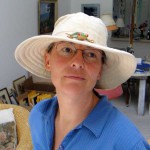 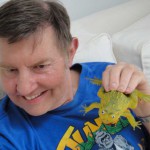 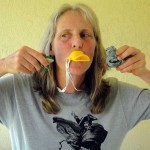 Daisy with the Wacky Quacker and Mt. St. Helens Froggie 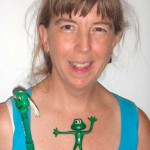 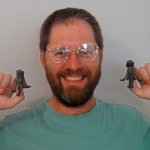 Barry with Mr. and Mrs. Froggie 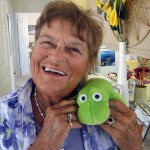 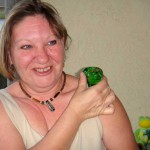 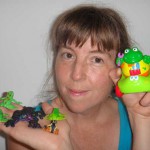 Meps with Playskool Froggie, Sparkle Froggie, and the Little Froggies

4 thoughts on “Along came a Froggie”