As our one-year anniversary of living in the boatyard neared, I told my friends that we were planning to celebrate the event. Most of them looked at me as though I’d sprouted two heads. “You haven’t been able to launch your boat after working on it for a whole year, and you want to celebrate this fact?”

They rolled their eyes, but they came anyway.

That morning, we had begun installing the first three portlights. “Which side do we do first?” Barry asked. “The port side, of course!” My reasoning? The picnic table and barbecue grill were on the port side, so our guests would be able to admire our shiny bronze ports.

As usual, the work took longer than expected. We were still cleaning up messy black butyl and white polysulfide caulk as the guests began to arrive. We never made it to the showers, and the interior never got cleaned up. We hoped our friends wouldn’t come up on the boat and notice. 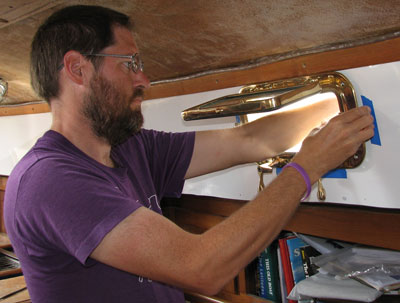 But as we fired up the grill and set out the appetizers, the first raindrops began to fall, and there was no place to go but up the ladder into the boat. The scene inside Flutterby was a disaster — there were tools and parts and clothes everywhere, and dishes were piled up from several meals. We quickly passed out drinks, hoping to distract our guests from the boat’s condition. We kept them busy, too: All hands were needed to man buckets and towels under the starboard portlights, which at that point were gaping 5- by 12-inch holes in the side of the cabin.

The storm passed fairly quickly and the party moved back outside, and nobody gave us a hard time about the condition of our interior. Our friends have very low standards, or else they’re very kindhearted. Given the  gifts I received at the party (my birthday had been the day before), I think it’s the latter.

Over the next few days, I took stock of our one-year situation. I have learned and accomplished a lot, including the following things that I didn’t know I needed to experience:

Most importantly, I discovered that some of the nicest people in the world are found in boatyards, hardware stores, lumberyards, and vegetable stands. This, coupled with the miraculous fact that we have not had to buy anything at West Marine, explains why I still have a sense of humor after a whole year.

6 thoughts on “After a year, I still have a sense of humor”