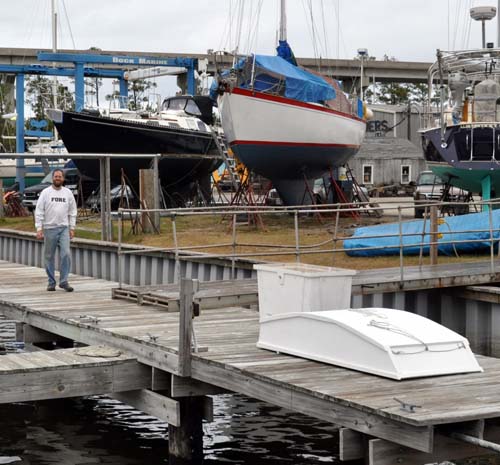 What's that white thing on the dock? A shoebox, a bookshelf, or a boat?

On the big day, when we launched Flutterby, I didn’t pour all the champagne over the bow. There was some left in the bottle, so a bunch of us went down the dock to where a little wooden shoebox, about six feet long, sat waiting. Kris and Barry picked it up and dangled it down to the water by its painter, letting it down with a  splash. Way, way down there in the water below the high dock, it looked for all the world like an abandoned piece of furniture. Somebody tossed a couple of wooden oars into the shoebox-bookshelf, and then they all turned to me, expectantly.

There it floated, nine years in the making, waiting for the builder to test it. I felt like the ancient Roman bridge designer who had to stand under his bridge when the first load went across. What if I was too heavy? What if it flipped, or worse yet, slowly sank? I could hear the blub-blub-blub in my imagination. But it’s amazing what adrenaline and an audience can do. White-knuckled, I climbed down the ladder into the tiny vessel that I had given birth to from a pile of plywood.

I was still hanging onto the ladder with a death grip when Barry handed me the bottle of champagne.

It felt like a toy boat, something that should be christened with Kool-Aid. But I wanted the gods of the sea to take this thing seriously, so I poured champagne over the “bow.” (Since the boat doesn’t have a pointy end, it’s a little hard to tell which is the front and which is the back. It would probably row just fine sideways, if I mounted the oars that way.)

“I christen thee Flutterwent!” The name was Kris’ idea. It rolls off the tongue better than Flagondry or Rockcoach, two bug-based Spoonerisms that sound a lot worse than Flutterby.

Before I knew it, Barry was climbing off the dock to join me in the boat, I think because I had the bottle of champagne. Or maybe because he wanted to swamp it and go swimming. Surely this thing was not rated for two adults, was it? Thank goodness the Coast Guard wasn’t around to see the open container in an overloaded vessel with no lifejackets.

But she didn’t ship any water when he climbed in. We sat there, facing each other, grinning, and passing the champagne bottle back and forth. Meanwhile, the current was carrying us away from the dock. Whoops! Time to do something about that!

Using ridiculous 7-foot oars as giant paddles, we paddled through the marina and over to the ways, where Flutterby awaited us. The scariest part was getting back out again! I didn’t know how stable it was, but I knew how stable I was — not very. I guess the adrenaline got me out of the boat as well as into it, although by now most of our audience had lost interest and wandered off for happy hour. I was already plenty happy.

You might be wondering, why would anyone use such a strange-looking, tiny dinghy? Normal cruisers go back and forth from their boats in stock gray inflatables with stock outboard motors. Why not the Flutterbies?

For years, Barry wanted to build a 34-foot sailboat with me. This terrified me, because I was afraid of power tools. I’d had an accident in college with a bandsaw and nearly ended up eight-fingered Meps.

In 2001, our housemate, Sharonne, signed up for a beginning woodworking class. For the first four weeks, the students built toolboxes using a table saw, joiner, planer, biscuit-cutter, and sander. For the remainder of the class, they worked on their own projects. At the end of ten weeks, Sharonne proudly brought home the toolbox and a tall bookshelf that she had built with her own hands.

I signed up for the next session and built the same toolbox. Then the teacher sat down with the class and told us we were free to start on our own projects. He went around the room and asked each person to say what they wanted to build. “A CD rack,” said one. “Toys for my grandchildren,” said another. 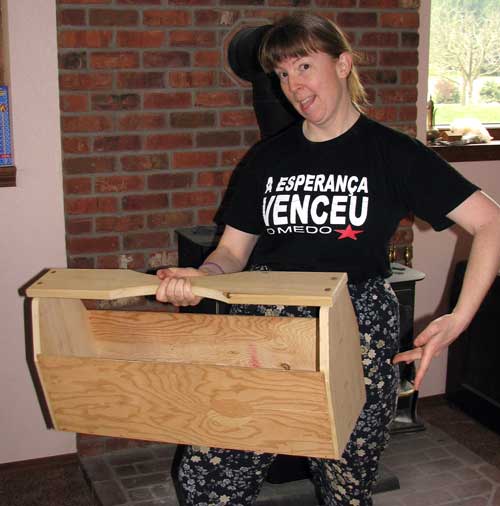 I never checked to see if the toolbox would float. It would make a great dinghy for the dinghy.

“A toy boat?” asked the teacher.

The rest of the class stared at me.

“Don’t you remember Sharonne, from last term? She built a bookshelf. I promise my boat will be just like a bookshelf.” He rolled his eyes and made me stay after class to convince me that I couldn’t build a boat.

The following week, I showed him the plans. Phil Bolger’s Tortoise dinghy looks a lot like a floating bookshelf, so he reluctantly permitted me to start. A couple of months later, Barry and I loaded my plywood dinghy on top of Peepcar and brought it home. I’d done the final assembly in Woodworking Two, with a more encouraging instructor.

The good news was, I still had all my fingers. (So did the instructor from Woodworking One, who’d nearly run his hand through the table saw helping me cut the framing.) The bad news was, it wasn’t a boat yet.

It was a thing of beauty, constructed of luan plywood with pine framing and copper ring nails. For the first year, it sat on our back porch. For the next five, it hung in my in-laws’ garage.

I was proud of my accomplishment, so I told people that I’d built a boat. But whenever Barry heard me say that, he’d correct me. “No, you didn’t. It’s not finished.”

In 2008, I painted it with epoxy resin to protect the wood, and we tied it on top of the Squid Wagon. We drove from Seattle to Flutterby in Beaufort, North Carolina, via San Diego, with that tiny, funny-looking boat on top of the van. 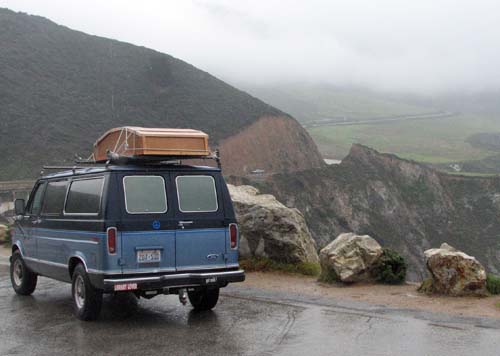 The ant and the elephant along the California coast (April 2008)

It looked like an ant on top of an elephant. All the way across the USA, we got reactions like the guy with the toothpick in his mouth who sauntered over to Barry, not noticing me nearby. “What is that?” he asked. “Some kind of storage pod?” “No,” said Barry, “It’s a boat.” The guy looked more closely and said, “Oh.”

Then Barry added, “My wife built it.” The guy cracked up laughing. He thought it was the punchline to a really funny joke.

The epoxy wasn’t UV-resistant, and by the time we crossed the country, it already needed sanding and painting. We didn’t have anywhere to store it out of the weather, so we rented a 5×7 storage unit and stuffed it inside, using it to store other items — just like a bookshelf!

That was getting really irritating, so last summer, I took the poor neglected dinghy out and put it under Flutterby. It was time to finish it, a job only I could do. If I let Barry help me, then, when I said “I built a boat,” he’d still have an excuse to correct me. “No, you didn’t. We built a boat.”

My sawhorses sat on some turf with boatbuilding history. Between 1983 and 1995, Bock Marine built and launched over 30 boats in that spot, including the 122-foot White Dove Too. Like the WDT, my dinghy was brought from another location and completed on that hallowed ground. But there are some differences. Their ships were steel, launched using a dramatic side-launching technique (this is a hilarious photo of people running from the splash) instead of our painter-dangling end-launching technique. I calculated the ratio of length-to-time-under-construction: At 6.5 feet and 9 years, Flutterwent’s ratio was 505. Knocking out a couple of 85-footers a year, Bock’s was 2.1.

I finished the dinghy in the heat of the summer, using all the woodworking, epoxy, fiberglass, and painting skills I learned on Flutterby. While I was working, I wore headphones and hearing protection. Not because of the power tools, but because I was tired of all the men in the boatyard wandering over to stare. I was tired of explaining that I was not building a hard dodger to cover the companionway.

When I was done, I said to Barry, “I built a boat.” Then he hugged me instead of correcting me.

It still wasn’t completely done, having no means of propulsion. But it’s past midnight, and I am done for tonight! Tiny boat, big story. I’ll put the photo essay below and save the rest for another time. 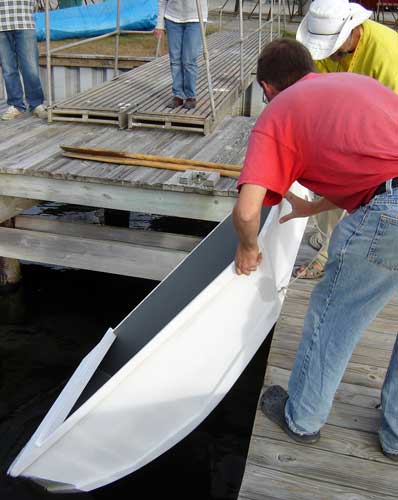 Barry and Kris drop the dinghy into the water, stern-first. "Yikes! Who's got the painter?" 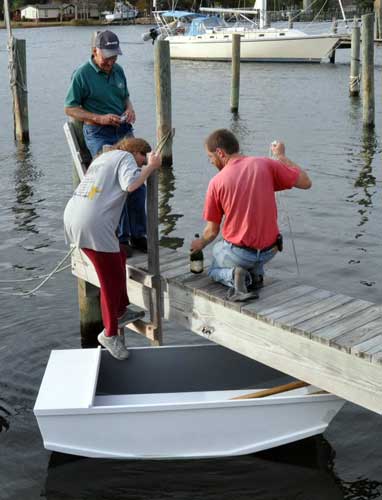 With nerves of steel, I step into the floating box. Ted, who has launched many dinghies, was there to help, and Barry had the painter and the champagne. 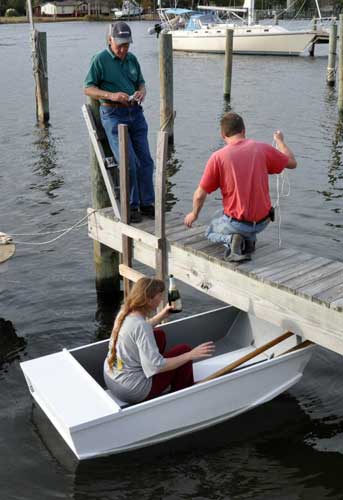 You can tell from my hand that I am afraid to move, for fear it will sink or tip over. 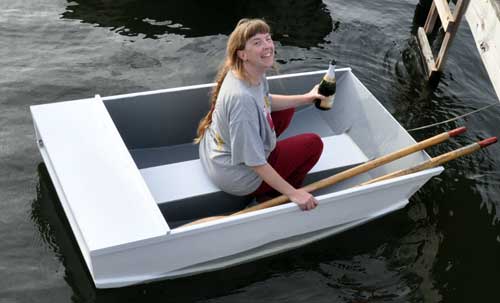 I haven't sunk yet. And I have the champagne. So I'm smiling. 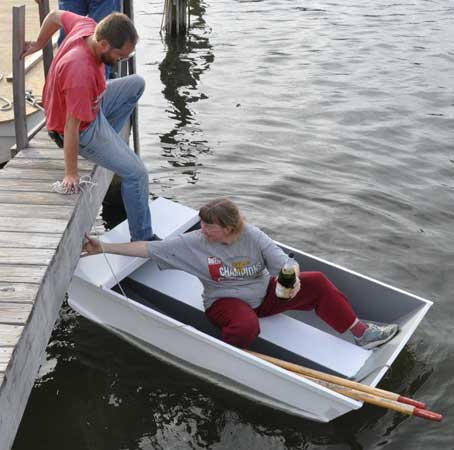 Oh no! Here comes Barry to see if he can swamp my dinghy. 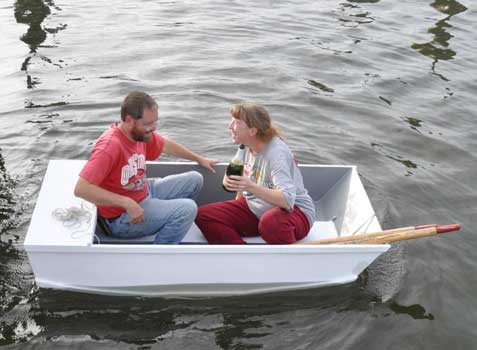 As the current carries us away from safety, I say, "You want some of this?" 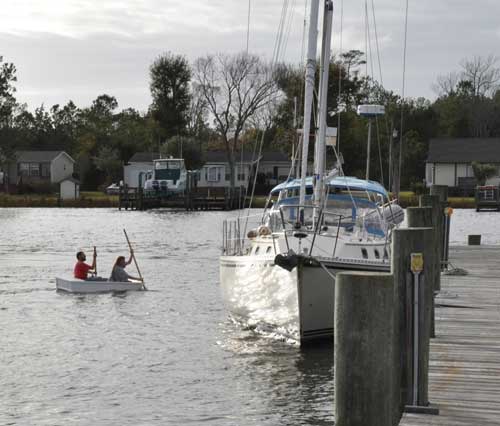 Giggling, we pick up the oars and paddle into the sunset. She tracks like a shoebox instead of a soapdish. 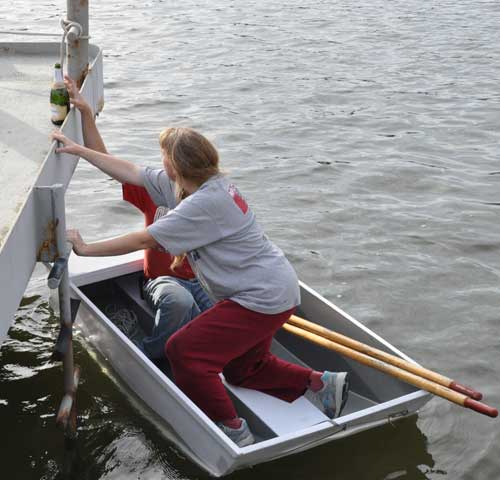 Getting out is trickier than getting in. Barry made sure the champagne bottle was safe, but I think it was empty by now. 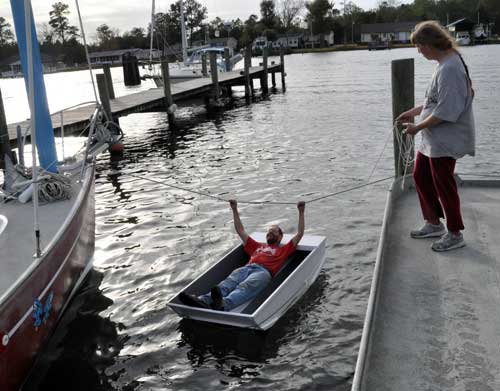 Whee! Barry has fun scooting under Flutterby's bow line. At 6-1/2 feet long, the Tortoise dinghy is just long enough for a nice nap.

6 thoughts on “A little dinghy”