I was puttering around this morning, thinking of our new friend from Ohio, Charlie, and how it might be fun to start a drinking club here for Ohio expats. This may come as a surprise to our Seattle friends, who don’t even know about our Ohio roots. But as one astute friend said, growing up in Columbus, Ohio inspires long-distance travel.

Just then, Barry came back to the boat with a piece of nicely-shaped teak in his hand. He’d been over at Charlie’s trailer, using the bandsaw to shape a new piece of toe rail.

“Remember the cat that was hanging around Charlie’s trailer last night?” he asked. “She had kittens … on Charlie’s bed.” I grabbed the camera and headed over to see. 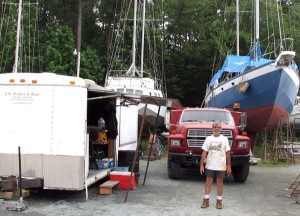 Charlie, with his trailer, truck, and boat

Charlie showed up last weekend to do some work on his boat, and everything about his rig — truck and trailer — shouted “BUCKEYE!” There were the Ohio license plates, the Columbus address on his trailer, and the bright red folding chairs with “Ohio State” stenciled on them in white 4-inch letters.

Barry and I, on the other hand, own two Ohio State t-shirts that we only use for painting and epoxy work, because we’re embarrassed by them. No other OSU paraphernalia — we’re very reluctant alumni. Sure, it’s a good school, but some people take the team spirit thing too far. When I lived in Columbus, I worked with a woman who dressed in scarlet and gray on Fridays during football season. I remember that this included a jumper with one gray knee sock and one scarlet one, an OSU sweatshirt, and a giant necklace made of buckeyes. And she hadn’t even gone to Ohio State, nor did she have football tickets!

Despite my reluctance to advertise my Buckeye affiliation, I had to get to know Charlie. We spent a couple of evenings hanging out around his trailer and talking, and discovered that he’s really interesting, and easy to talk to. He’s got a gigantic steel boat that’s trying to rust faster than he can get it in the water. The boat was such a mess, he’d been sleeping in the trailer. But he’s gotten the boat cleaned up, and last night, he said that would be his last one sleeping in the trailer — he was planning to sleep in the boat tonight. 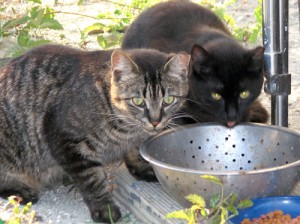 Charlie has a really central location, right by the Travelift. The first time we’d hung out at his trailer, there had been a strange, friendly dog hanging around. Last night, when we stopped to talk, it was a cat, instead. She was orange and white and incredibly thin. She was very snuggly, rubbing against our legs and pushing her head on our hands to be petted. Charlie fed her some tuna, and she followed us back to our boat and we gave her cat food. But Flutterby’s two feral cats made her unwelcome, and there was a bit of yowling and cat-fighting under the boat last night. When I got up this morning, she wasn’t around.

After Barry’s announcement, I found Charlie standing outside his trailer, smoking a cigarette and looking a bit dazed. “I’m a Daddy!” he said.

During the night, the little cat had come into his trailer and climbed up on his head. Charlie likes cats, and has a couple of them at home. But he wasn’t going to have this strange cat sleeping on his head. So he moved her down to his feet and went back to sleep. When he woke, she was still at his feet, nursing two tiny kittens.

Charlie’s got a bit of a dilemma — he and his trailer, and the kittens’ bed, are going back to Ohio next week. In the meantime, he’s going to be sleeping on the boat and wondering what to do with three cats that he didn’t have yesterday. 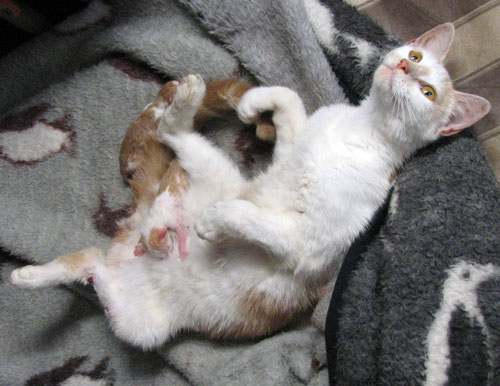 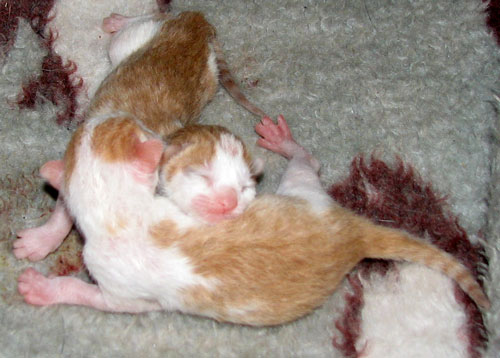 The kittens that were born on Charlie's bed

5 thoughts on “A Buckeye with a cat on his head”