As a man named Grey told me, “It started with a beer.” He could have been speaking of many regrettable activities. In this case, he was referring to the judging process for the “Backstreet Pub’s first (hopefully annual) Meatloaf Off.”

When pub owner Liz Kopf sent an email promoting the event, that’s exactly what she called it — first (hopefully annual). How refreshingly honest! As my pappy, the editor, told me, you should never say “first annual” in a news story. An event is not actually annual until it happens the second year.

As a food writer, I was super-excited by the prospect of a meatloaf competition. I pictured myself running around with my little notebook and pencil, documenting the judging process and interviewing the winners. Perhaps I could get a scoop and publish the winning meatloaf recipe in the Foodie Gazette!

When we arrived, the bartender told me that the judging was upstairs, and no one was allowed up there. I was crestfallen. “Not even members of the Press?” I asked. He rolled his eyes at my impertinence and went to take someone else’s order. I entertained myself by playing with my camera. 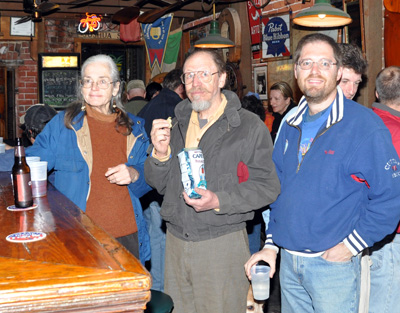 Marilyn, Philip, and Barry wait for winners to be announced 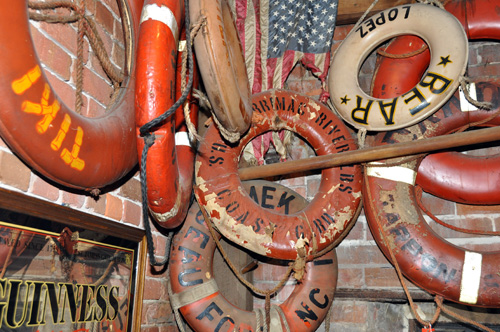 The Backstreet Pub has great ambience, now that it's non-smoking

A few minutes later, as I was cooling my heels, one of the judges came down the stairs. He was not much of an interview subject, though, being a dog. 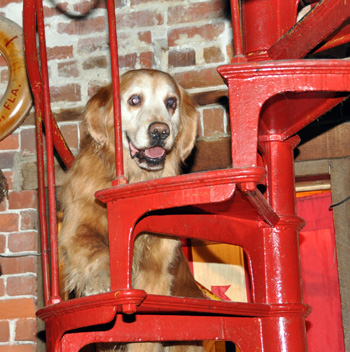 The first judge descends the staircase

Finally, the other judges came down and announced the winners. I was standing beside the third-place winner, a woman named Donna, and I congratulated her and asked how it felt. She shrugged. Then she saw my camera, scowled, and turned her back, saying, “No photos.”

Disappointed, I turned to one of the judges, a man named Grey.

“How did you get selected to be a judge?” I asked.

“I’m the bar-owner’s boyfriend,” he said.

At this point, I decided interviewing people was hard. Eating meatloaf would be easier. I joined the crowd making its way up the narrow spiral staircase.

Upstairs, folks were lined up, plates in hand, to taste the 12 meatloaf-off contenders. I took a small spoonful of each, along with some mashed potatoes and some sort of spinach dish. Afterwards, I talked with first place winner Kathy Roberts and second place winner James Lewis about their winning entries.

Kathy’s meatloaf was based on an old recipe published by Kellogg’s cornflakes. Instead of baking it in a loaf pan, she pressed the mixture into muffin tins, making small, round meatloaves. I’m sure her lettuce-lined platter got the highest score for presentation, before the hungry crowd descended upon it. 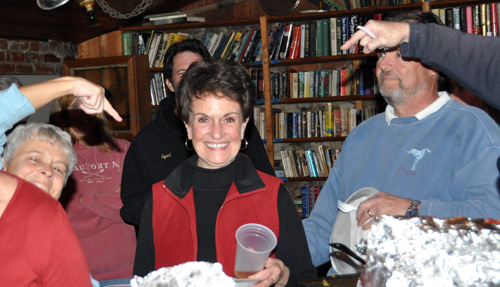 Kathy’s topping was not only delicious, it was nice and thick. She had basted each loaf at least three times during baking with a mixture of chili sauce, brown sugar, and catsup.

James’ meatloaf, which took second place, had a secret ingredient: Klaussen’s Sauerkraut. He used a basic meatloaf recipe with oatmeal for filler, pressed half of it into a pan, and then covered it with a layer of sauerkraut. On top of this, he put a mixture of one part stone ground mustard, one part yellow mustard, and one part honey. He covered this with the rest of the meatloaf and topped it with catsup.

I asked James where he got the recipe. 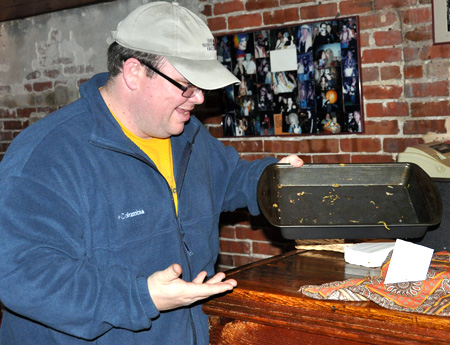 “I’m a computer tech,” he said. “A few years ago, I went to somebody’s house to work on their computer, and they were making dinner while I was there. I saw them putting the sauerkraut in the middle of the meatloaf, and I thought, ‘Sauerkraut? What the heck?'” But I went home and tried it, and I’ve been making it this way ever since.” 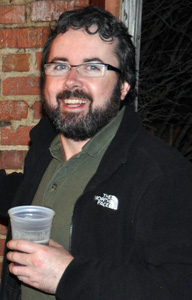 Kevin arrived late, and most of the meatloaf was gone. There was still beer. 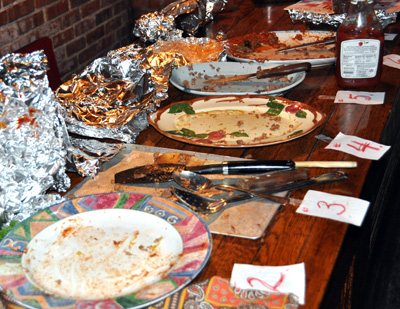 "They licked the platters clean!"

At the end of the evening, I realized I was not cut out to be a hard-core journalist. First of all, I found it easier to interview meatloaf than people. Secondly, I was not objective. I preferred James’ meatloaf over Kathy’s, and I thought the spinach was better than all the meatloaves! Most importantly, I had failed to answer the key question: Who brought the spinach dish?

A few days after the event, I ran into a woman named Denise who I knew from around town. She’d been at the Meatloaf Off, where she told me about the prior competition — a macaroni and cheese contest. She was also brainstorming on the next one, which might be a chicken soup contest. So it was natural for me to ask, “Did you have anything to do with organizing the meatloaf competition?”

“Oh, no,” she said, “I just brought the spinach souffle.”

And that’s how I got the recipe for what I consider the REAL winner of the “Backstreet Pub’s first (hopefully annual) Meatloaf Off”: Denise’s Mom’s Spinach Souffle.